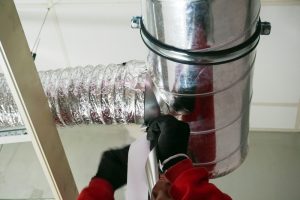 Duct testing is necessary when you either suspect or know for certain that your air ducts are allowing conditioned air to leak, or outside air to get in.

Your air ducts are what your central heating and air conditioning systems rely on to effectively do their jobs. They either cool or heat the air, and then blow that conditioned air through your network of ducts into the various rooms of your home. This ductwork system is most often located out of sight—behind walls, in the attic, and in other out-of-the-way locations that allow them to do their jobs without getting in your way.

However, this can certainly make it difficult to detect or spot when leaks or other duct problems happen. The good news is that our team can address the problem by performing professional duct testing to determine where your leak is coming from. But first, you’d have to know that you have leaky ductwork. We’ll get down to that below. First we want to talk to you a bit about how leaks happen and why they’re such a problem.

Ductwork can develop leaks from even the most minimal of damage. It could be something like work in another part of your home that inadvertently damages the ducts if the workers aren’t paying close enough attention. Or, as unpleasant as it is to think about, it could be a matter of vermin getting in your ductwork.

Sometimes, ducts even develop leaks due to simple wear and tear. For example, if a bolt holding two pieces of ductwork starts to loosen over time, a leak can form by default.

The Problem with Leaky Ducts

Leaking ductwork is a problem because it reduces the efficiency of your HVAC systems. The leak either pulls conditioned air out of the ducts or pulls unconditioned air in. Either way, this can have two different detrimental impacts:

Both of these issues will rob your HVAC system of energy and force it to work harder than it should have to in order to do its job, which raises your monthly bills, and your risk for a system breakdown.

“But How Can I Spot a Problem?”

Some signs you should watch out for that there is a problem with your ductwork warranting professional duct sealing include:

Luckily, it’s relatively easy to notice these signs. So long as you know what to look for, you’ll be able to contact a pro before the problem becomes too large that it turns into an emergency. Even if you’re unsure if the problem is in fact with your ductwork or the HVAC system itself, our team is happy to come inspect!